by Staff
Read an excerpt from "Never Look Back", the autobiography of jockey Billy Pearson detailing a story about Chester's amazing character and generosity. 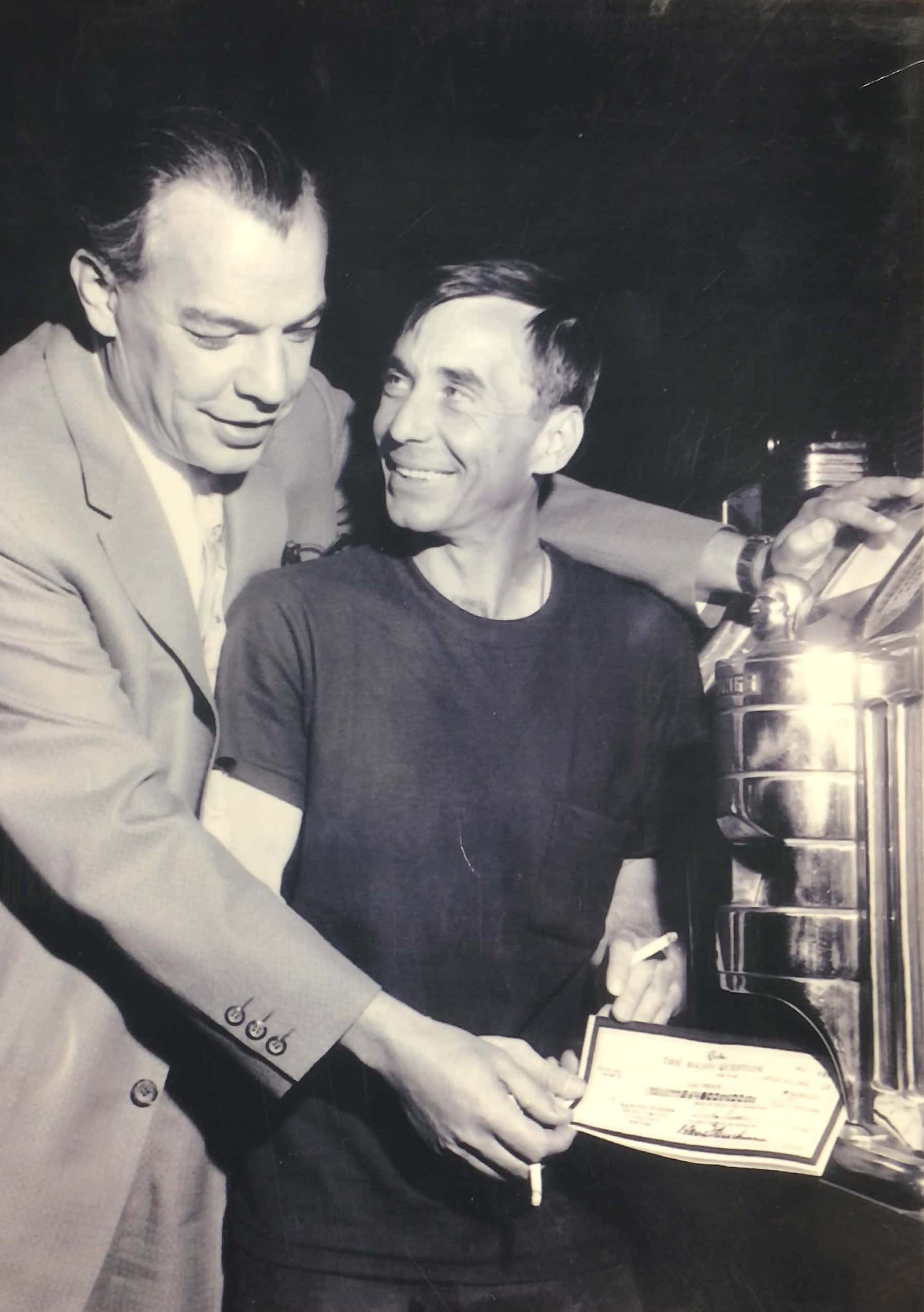 Flashing on the television screen was the board of categories. Up in the corner, in the Number One position, was lettered: GREAT ART AND ARTISTS. I said, “I’ve never seen anybody take art as their category.”

Chester said, “Why don’t you write in? You’re hep about that art business. You could win something. Not sixty-four thousand dollars, but you might wind up with a Cadillac, and that?s better than a kick in the head with a heavy boot.”

“I couldn’t get past two hundred and fifty-six dollars.”

“What have you got to lose? Sit down and write a letter.”

“That writing in a letter is just a racket to find out how many people are watching the program. The folks they put on are all college professors in disguise. Ringers.”

Chester was disgusted. I went out into the casino. I was standing at a crap table watching a high-rolling Texan. Chester came over with a letter. He handed me a ball-point pen and said, “Sign it.” So I did.

Weeks later the phone rang. It was Miss Barnhart from “The $64,000 Question” program. She said, “We would like you to come to New York for a personal interview. Do you have the time, and will you come?”

“The sooner the better.”

“I’ll call you the minute I arrive in New York.”

I went to the bank to find out how much was left there that belonged to me. Total capital: $461. I drew it all out and closed the account.

I bought a round-trip airplane ticket, tourist class, via Las Vegas. I stayed at the Flamingo Hotel, planning to catch the next plane out of Vegas for New York the next morning. Sitting there, I thought perhaps my luck had changed. Maybe all the bad days were over and the good ones were just beginning. With the $250 left, I went up against the crap tables. In three minutes I was broke. I walked to the table where Chester was sitting; he ordered a couple of drinks and said, “I hope you’re satisfied.”

He said, “I’ll pick you up and take you to the airport in the morning.”

“Lend me a hundred?”

“For the table-no. If you win you’ll never get to New York for that TV show.”

I had breakfast with Chester, and we drove out to the airport. They put my bags on the plane, and Chester reached into the back seat of his car and handed me the biggest box he could lift. It must have weighed at least as much as a colt. He said, “This flight you’re on is a tourist flight and they don’t serve food. It’s a long time between here and New York. I had the hotel make you up a box lunch.”

“I wouldn’t carry that thing on the plane for a million dollars. It doesn’t look like a box lunch; it looks like a coffin with somebody in it. You must’ve knocked somebody off and you want me to get rid of the body.”

He laughed and said, “I’m going to have it put on the plane.” He called a couple of the TWA men over and told them to put it in the cabin. Then we shook hands. He said, “I know you can do it in art like you did it in the races.” He reached over, doubled up his fist and clipped me on the chin a little bit, and shoved a bill into my breast pocket. I said good-bye and ran up the ramp into the plane, feeling like I was going to Sing Sing for life.

The motors were revved up, and I settled back in the seat. I remember Chester’s gesture of putting something in my pocket. I reach in and pulled out a bill: $500. How can I explain Chester? My old man couldn’t have done more – pack up a lunch for me and send me off to school with some dough in my pocket. To make me equal with the rest of the kids.

I told the hostess to crack open the big box that Chester had packed for me. It was a buffet luncheon for a team of wrestlers. There was iced champagne in bags of dry ice. There was a whole ham, a few chickens, salad. There were thirty people on the plane, and they became my guests. The stewardess brought out paper cups, and we racked open the champagne and passed out napkins. It was a real picnic, and it lasted till we got to Chicago.

People poured onto the stage. I tried to get away from them and find Queta. Queta appeared, swimming in a sea of people, tears streaming down her face. I threw my arms around her and kissed her. “Kid, kid, we made it.” I pulled her over to the side of the stage. I wanted to tell her a few close, intimate things. There was no chance. In five minutes there were a thousand phone calls from a thousand different places in the United States. “Bill, Ed Sullivan wants to talk to you.”

Half a dozen reporters were throwing me different questions, mostly: “What will you do with the money?” and “What are your plans?”

To everything I answered one thing: “Let’s get a drink.”

Excerpts from NEVER LOOK BACK, The Autobiography of a Jockey
By Billy Pearson and Stephen Longstreet
Published by Simon and Schuster, Inc. © 1958